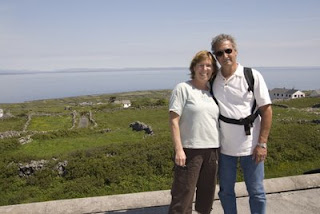 Day 2.
Great Irish breakfast (fried egg, ham, sausage, warm tomato & black & white pudding) and off to the Aran Islands. Thought we were late for the ferry but luckily we made it. The Irish don’t seem to be known for punctuality. It was a warm, gorgeous day as we ferried over to the beautiful islands. We got ourselves bikes and headed to the lighthouse. The Aran Isle (Innishmore) was absolutely spectacular! It was a very warm, sunny June 1st, I was actually overdressed with my short sleeve shirt, but the whole island was alive with color, texture and form. Stonewalls everywhere decorated by a multitude of colorful flowers and accented by cows, sheep and horses. I told Andy that if I ever have trouble sleeping, remind me of how wonderful it felt to be bike riding on the roads of the Aran Island. 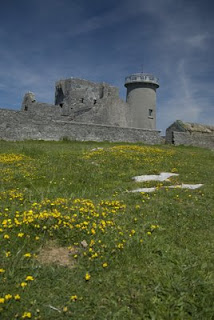 day, as we were surrounded by magnificent sights, wonderful weather and just a great sensation of finally being away on vacation. My plan was to try and get as far east and south as we could as our next stop was supposed to be the Ring of Kerry. We returned to the port and turned our bikes in early, so we went to have something to eat. The ferryboat pulled out of dock at 4:50 and we had to wait in the blazing sun for another…and it didn’t appear for another 45 min. So, we returned to Rossaveal at 6:30. A might later than planned. We drove and drove (one road I took was the first time we encountered another car who had to back up so I could get through) Finally around 8:30 we were outside of Galway in a town called Kinvara. We tried for a B&B and were told it was full. We tried a second time and lucked out. The innkeeper, Kathleen, sent us nearby to "world famous" Moran’s for dinner, where she claimed, people came by helicopter to get a taste of their fine fish. It was a pleasant pub and we enjoyed our dinner there. Had a tough night’s sleep, though, despite the clean place and nice bed ... it was closer to the highway than we had realized & we heard car noises all night. All part of the adventure I suppose.