July 21, 2016
I've been preparing for a Landscape Workshop at Precision Camera in the Fall and getting my PowerPoint presentation ready. I started out with some of my favorite quotes and my friend Stephanie Sharif suggested I add photos of the people who spoke the inspiring words and perhaps an image that person is known for.

So, I researched George Eastman - and I was thrilled to read about his life - did you know that not only did he invent the first roll of film and the first actual camera, he was a major philanthropist, giving money to the arts, music, medicine and education including historically black universities in the south.
Wow! I'm impressed!  Another quote I've stumbled on and loved was from Elliott Erwitt:


“To me, photography is an art of observation. It's about finding something interesting in an ordinary place... I've found it has little to do with the things you see and everything to do with the way you see them.”   -Elliott Erwitt
Although I didn't learn a whole lot about Mr. Erwitt, besides he was born in Paris and had an amazing career as an esteemed Magnum photographer since 1953. He has captured many of life's most poignant ironies using a touch of humor through his brilliant black and white photography. I encourage you to look at some of his work - it is something I believe we can all immediately identify with.

Dorothea Lange is another important photographer who has influenced my work. It was fun finding a photo of her and reading about the challenges she faced after having survived polio at age 7. It left her leg and foot weakened and yet she was able to make a living documenting Native Americans and folks affected by the Great Depression. 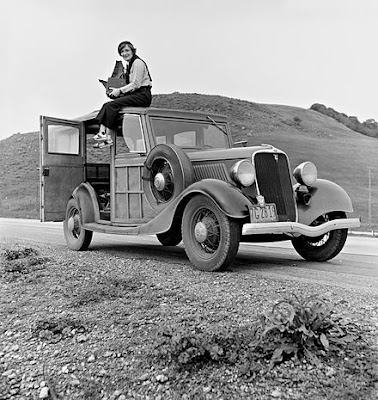 “Photography takes an instant out of time, altering life by holding it still.”
– Dorothea Lange

As much as I've loved learning about some heroes, I am also enjoying putting together my notes to tell people about the joy of landscape photography and what they can do to improve their own images.  I hope you might be able to join us in September. Keep an eye out for the scheduling of this class.

In the meantime, keep shooting, friends!