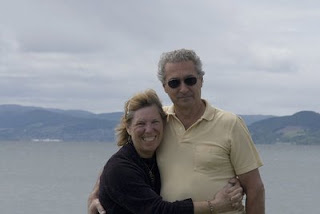 Saturday morning we had to pack up our charming retreat house after a lovely country breakfast. Andy wanted to head for some lighthouses. Mandy was eager to get to Edinburgh. We attempted to do both with a poor understanding of the geography and how far everything was from each other. On the map it looked easy - just head east and stay along the coastline and, after discovering lots of cool towns and lighthouses we'd arrive in Edinburgh.

In reality we'd gotten a later start and were headed in a direction that wouldn't get us to our final destination until the following day. Would have worked except we had reservations in Edinburgh and, after Mandy contacted them, learned we would be responsible for paying for the night whether we showed or not. So, we found the Lossiemouth Lighthouse and turned around and headed south for another long drive.

Once again, the landscape along the way was magnificent.